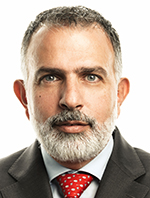 “The Committee has worked on a number of key issues this year including changes to oil pollution laws in California, issues relating to limitation of liability, salvage, and Covid-related issues including crew competency and insurance cover. Sanctions continue to be a key priority following the issue of the US Sanctions Advisory in May 2020 and its wide-ranging guidance for owners and operators. The Committee continues to consider ways in which it can support INTERTANKO Members with all emerging legal and insurance concerns.”
Andreas Andreou, Chairman

What is the Committee looking to achieve this year?

Please note:
Committee meetings are restricted to Members and only show when logged-in to the site

Notice of Meeting: Insurance and Legal Committee, London - 17 May

INTERTANKO’s Insurance and Legal Committee is due to meet in-person at INTERTANKO’s London Office on Tuesday 17 May. A full... MORE

INTERTANKO’s Insurance and Legal Committee met in London last week under the chairmanship of Andreas Andreaou of Columbia Shipmanagement. This... MORE

The Association's Insurance and Legal Committee met in Oslo this week under the chairmanship of Mr Ken Marshall of Neda... MORE

The Association's Insurance and Legal Committee met in London last week where it took the opportunity to review the five... MORE

There are no resources for this committee.

a) The aim of the Committee is to further the common interests of the independent tanker industry with regards to all relevant insurance, liability and legal issues particularly affecting tanker

b) The Committee shall in addition to acting as a resource group for other INTERTANKO bodies as well as the INTERTANKO office, whenever possible act as a link between INTERTANKO and the insurance industry and its organisations.

c) In its work the Committee is to pay due regard to relevant work being done on other INTERTANKO Committees and in other bodies outside INTERTANKO.

2. MEMBERSHIP OF THE COMMITTEE

a) Membership of the Committee shall be endorsed by the Council.

b) The Committee's aim is to have in the region of twelve members. Four Committee members in addition to either the Chairman or one of the Vice-Chairmen shall constitute a quorum.

d) INTERTANKO officials may attend Committee Meetings as well as representatives from other INTERTANKO Members on an ad-hoc basis with the agreement of the Committee's Chairman.

a) The Committee shall appoint its own Chairman subject to the ratification of the Council. The Committee may appoint one or more Vice-Chairmen.

b) The Chairman’s term of office is two years which can be extended for another two years, unless other reasons apply and are approved by the Executive Committee. Examples of when other reasons apply could include when a new Chairman cannot be found or the resolution of an important issue under discussion by the Committee would benefit from the Chairman’s leadership.

a) Committee meetings should take place twice a year. Committee members should make every endeavour to attend not less than one meeting per annum. Members further commit themselves to participate as fully as possible in e-mail discussions of matters arising between meetings. Such discussions are an important part of the Committee's effectiveness. Should a committee member not be able to attend meetings the member will be encouraged to submit written comments.

b) Repeated non‐attendance/non contribution may result in a review of Committee membership by the Committee Chairman and Secretary and a recommendation of removal from the committee. A Committee member may, on occasion, be represented by an alternate from his company.

The travelling expenses of the Committee’s membership shall be paid by the member company.

The Terms of Reference shall be approved by INTERTANKO’s Council.

The INTERTANKO Secretariat undertakes the secretarial and administrative tasks for the Committee.

The Committee will report to INTERTANKO's Executive Committee or Council as required.